To share your memory on the wall of Joseph Humphrey, sign in using one of the following options:

Print
Joe Humphrey, a brilliant and innovative consulting electrical and mechanical engineer, left us on June 16, 2021 for a better place. His passing was accompanied by chants from Tibetan monks at Boudhanath Monastery in Kathmandu, Nepal.

Jo... Read More
Joe Humphrey, a brilliant and innovative consulting electrical and mechanical engineer, left us on June 16, 2021 for a better place. His passing was accompanied by chants from Tibetan monks at Boudhanath Monastery in Kathmandu, Nepal.

Joe was born in Reno, Nevada in May 1937 to Marvin and Lucie Humphrey, and grew up on the family ranch in California’s Sierra Valley, where he attended a one-room schoolhouse. The family later moved to Reno, where Joe graduated from Reno High School. He earned a Bachelor of Science in Electrical Engineering from Stanford, followed by an MBA in accounting from Stanford Business School.

In 1966, he and Nancy Cohen married in Sun Valley, and they moved to the Valley permanently in 1972. Joe was the Engineer and Construction Manager for Elkhorn’s first phases, including the Village, Bonne Vie, Indian Springs, and more. He later opened his own consulting engineering firm, which he kept until his retirement.

Joe served in the Idaho Air National Guard, at Gowen Field in Boise, retiring with the rank of Major. In Sun Valley, he was a member of the Sun Valley Volunteer Fire Department and served on Sun Valley City Council for several terms in the 1970s and ‘80s. Since 1974, Joe served as an active board member of the Sun Valley Sewer & Water district. He was also an instrumental part of Nancy’s business, The Under Takers, lighting holiday trees valley-wide. Together, they helped create a beautiful and festive winter nightscape.

Along with Joe’s commitment to his Country, the City, and the community that he so loved, his devotion to his children Aaron, Rachel, and wife Nancy was the core of his being. He was extremely supportive of his family, willing and able to follow in many escapades which relied upon his dry sense of humor, creative problem-solving, and prodigious skills in disaster avoidance. When the family wanted to take its Welsh Mountain pony Penny backpacking but did not have a trailer, Joe fashioned an innovative system in the back of his old pick-up to transport the pony, dog, gear and cooler with beer to the trailhead.

Joe was always ready for the next adventure, traveling the world with Nancy. Some of his favorites included: going on pilgrimage to Mount Kailash in Tibet; river rafting in the Arctic National Wildlife Refuge; camping with grizzly bears in Katmai Park, Alaska; going on safari in Gorongosa National Park in Mozambique; and riding horses with the gauchos in Patagonia. He also loved adventures close to home, including weekend backpacking and picnics in the nearby mountains.

Joe loved entertaining and barbequing for friends on his deck along Trail Creek on Sun Valley summer evenings. He loved Nordic skiing, fires in the fireplace, great conversations around the dinner table & making plans for the next trip. Joe’s family will hold a celebration of Joe’s life and legacy in the fall. In lieu of flowers, donations to the Hospice of the Wood River Valley in his name are appreciated.

Joe is survived by his Nancy, his children Rachel and Aaron, his grandson, Dante; and his sisters Ellie Riley, Sarah White, and Barbara Redman; his cousin, Jimmy King; and beloved "family" member Tshering Phinasa.
Read Less

Receive notifications about information and event scheduling for Joseph

We encourage you to share your most beloved memories of Joseph here, so that the family and other loved ones can always see it. You can upload cherished photographs, or share your favorite stories, and can even comment on those shared by others. 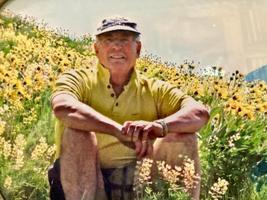